I could’ve had a V8: diffusers vs air purifiers 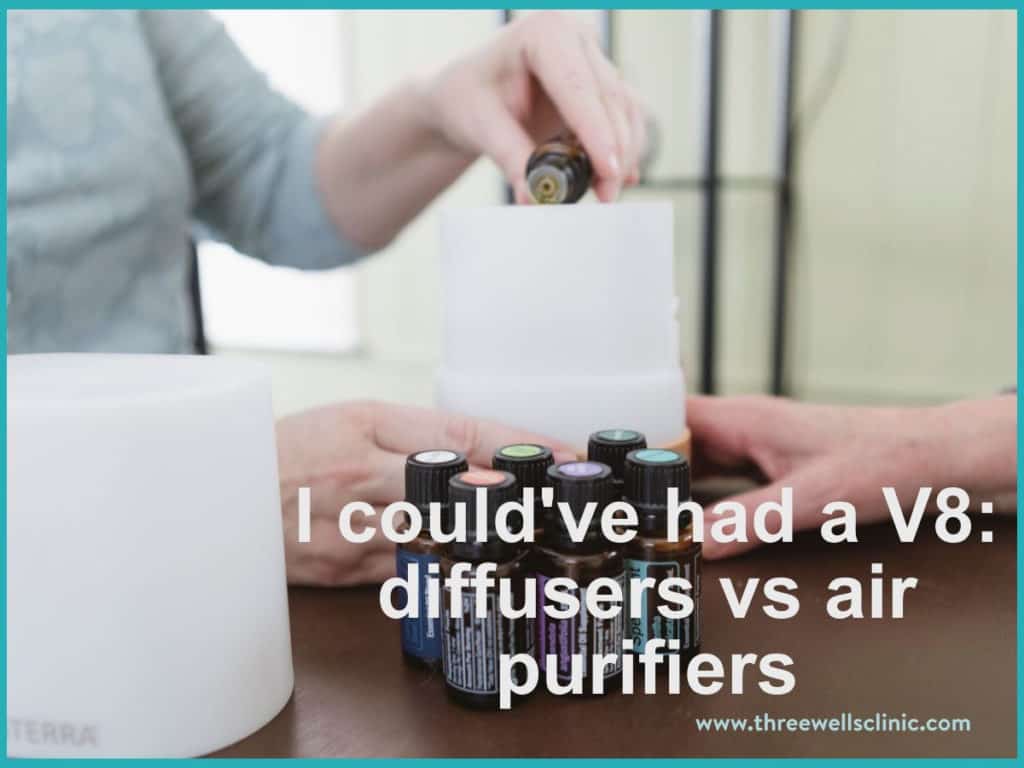 Do you remember the old V8 vegetable juice commercials? Where the person was walking around lopsided all day or had low energy and then smacked their forehead realizing that they should have drank their V8 juice?

Well, a realization just hit me a few weeks ago that felt just like that commercial.

Don’t run your essential oil diffuser in the same room at the same time as your air purifier.

I’m almost embarrassed to tell you I’ve been doing this for two years when I finally realized it!

I run our diffuser in our bedroom most nights which helps both of us sleep.

Then a couple of years ago, I bought an air purifier (like this one) to run in the bedroom as well, because my husband has always been prone to allergies.

At the time, we had carpeting in the room and I thought it would be a good idea to keep the dust down and clear other air particles.

It was too good.

I typically will fill and turn on the diffuser about an hour before bed so it smells awesome in there when I’m ready to go to sleep. In the back of my mind, there was a quiet, little thought that the aroma just didn’t seem to be as pervasive as I expected it to be.

Why the weak aroma?

It wasn’t because of the number of drops. It’s a small room, 4-5 drops should be more than sufficient.

It wasn’t the quality of the diffuser. I use one of my favorite diffusers in there – the Lumo diffuser which is the same one I use at the clinic and works great.  (My other favorite is the Petal diffuser)

Maybe it was “nose fatigue.”  This is where you stop noticing a particular smell after you’ve been around it awhile. It’s not a problem – it’s just the way the nose works.

There are millions of smell receptors in our human nose but each receptor can only detect certain kinds of smells, so when they are filled up, they don’t “take in” any more of that scent until they clear.

[By the way, I had been calling this “nose blindness” in conversation, but technically that is the layman’s term for “anosmia” which is a medical loss of smell due to an infection or actual problems with the receptors. So “nose fatigue” is a more appropriate term.]

This is one of the reasons why running your diffuser on the intermittent setting (starts & stops every few minutes) is best. It gives the smell receptors in your nose a chance to clear.

But that wasn’t the problem either because I wasn’t in the room for the previous hour and my nose wouldn’t have gotten nose fatigue yet.

Then scrolling through a Facebook group one day, someone asked the moderator a question about their air purifier and the light bulb went on in my brain.

It’s the very same reason why if you are taking an antibiotic medication, you should not take a probiotic supplement at the exact same time.

If you take them together, the antibiotic will go to work on the good bacteria you are putting in with the probiotic, rather than working on getting rid of the bad bacteria. Thus cancelling out the good you are trying to do with both.

They should be taken at different times of the day.

Likewise, if you run your diffuser at the same time as your air purifier, the purifier will go to work on removing the good essential oil particles along with dust and other allergens.

Now I run the diffuser during the night and the air purifier during the day and my room smells fantastic at bedtime!

This post may contain affiliate links.  I may receive commissions for purchases made through links this post.  See my disclaimer.

Is Three Wells right for you?

Get a free 15 minute Q&A consultation to find out!

Are You Feeling Anxious?

Are You Feeling Anxious?

Here are 7 Easy Ideas to